We are clear on the policy intent and what our role is, so our advice is relevant and focused on the outcome we’re trying to achieve. 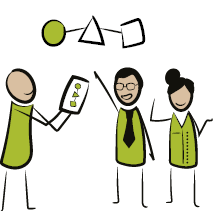 What does it mean to get Clear on Intent

One of the things we struggle with is understanding the ‘why’ — what is the problem we’re trying to solve and who for, what’s behind the problem, and what outcome we need to achieve. We need to get better at questioning until we’re clear on the intent; and then making sure that intent is carried through the life of the project.

Einstein is reported to have said that if he only had one hour to solve a problem he would spend 55 minutes defining it and the remaining 5 minutes solving it. Whether or not he actually said this, the point is valid. Having a clear, well defined problem gives you a much better chance of finding ways to solve it that will actually work.

Understanding the real reasons for the policy, not just those stated up front

You may be missing the subtext behind a particular policy directive, a reason the policy is needed beyond what’s stated. Policies can be seeded in many ways: a conversation the minister had with a constituent, or a media campaign, or an effective lobbyist, a long-standing issue that’s only just coming to the fore. This might be too sensitive to discuss widely, but understanding where the issue has come from, why it’s important now, puts you in the best position to recommend the most effective course of action.

Being able to articulate why government intervention is needed

You need to be clear on the Government’s role in solving this policy challenge. Sometimes the issue isn’t one the government should intervene in, or it might be more effectively solved in other ways.

This is about understanding the desired outcome and the impact. Even if a solution is handed to you with the policy challenge, you still need to understand the problem it’s solving and what a good outcome looks like. That will allow you to evaluate the solution, and explore whether other possibilities might be more appropriate. You also need to know where you’re starting from—having a measured baseline is necessary to evaluate success.

Having clarity on scope and timeframes

Good policy advice is timely and relevant. Being clear on the intent will help you use your time wisely, and save time second guessing. It’s also important to understand what’s driving the timeline so you can take that into account. And knowing how long you have will frame everything you do from that point forward. If a response is required in a day, you’ll take a very different approach to something that has a two-year lead time.

The official government policy process for developing a RIS. It includes questions you’ll need to answer if you have to complete a RIS (Regulatory Impact Statement).

An issues tree is a structured way to break problems down and plan what needs to be considered in relation to the issue. This is a step-by-step guide on how to create an issues tree.

Questions to test if your advice is clear on intent, well informed, practical to implement and influential.

The Department of Industry, Science, Energy and Resources (DISER) have offered some templates to help articulate:

The Policy Lab at the University of Melbourne,  has developed a report on public sector innovation (PSI) units, established by governments to bring new insights and approaches to policy design and delivery of public services.  The report inludes a list of public and private innovation labs in Australia and NZ.

New policy proposals may have a regulatory impact, requiring completion of a Regulation Impact Statement (RIS). This guide will help you understand when a RIS is required and what questions it needs to address.

The purpose of this handbook is to provide a description of the procedures involved in making Commonwealth Acts, especially the procedures coordinated by the Department of Prime Minister and Cabinet (PM&C).

This course will explore Australia's regulatory processes and why they are key to effective regulation.

What it is: 3-4 hour workshop for early those new to policy or wanting to freshen up their policy skills. Designed to deepen understanding of what it means to be ‘Clear on intent’ when developing policy advice. Courses are delivered by policy practitioners alongside a skilled facilitator with a background in policy development. Participants will focus on approaches that can be applied to their own workplaces with opportunities to bring the practice to life.

To sign up visit the APS Academy or email apsacademy@apsc.gov.au

A practical guide to help APS taskforces through every stage of the taskforce lifecycle.

The Policy Lab at the University of Melbourne,  has developed a report on public sector innovation (PSI) units, established by governments to bring new insights and approaches to policy design and delivery of public services.  The report inludes a list of public and private innovation labs in Australia and NZ.

Get in contact with a professional network of Australian public and academic sector employees with an interest in innovation.

This course will explore Australia's regulatory processes and why they are key to effective regulation.